In today’s world, we are surrounded by electromagnetic fields, most of them originating from human-made devices. Just as for any other environmental pollution, there are exposure level limits that must be adhered to.

EMF is short for ElectroMagnetic Fields or sometimes known as ElectroMagnetic Radiation (EMR).  Electromagnetic fields are present everywhere in our environment, the earth, sun, and ionosphere are all-natural sources of EMF. Human-made sources of EMR include electrical appliances, radio communications devices (public/private & military) as specific hospital & industrial machines. We can separate these electromagnetic fields into indoor and outdoor EMR sources, while indoor sources can be controlled is this for outdoor sources more a challenge.

Some electromagnetic waves carry such large quantities of energy that they can ionize particles of matter and consequently break down the chemical bonds between molecules. X-rays used for both diagnostic and therapeutic purposes (radiotherapy), gamma-rays (emitted by radioactive materials) and cosmic radiation, all have this ability and are known as ionizing radiation 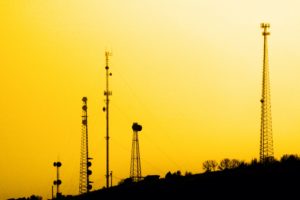 The term “EMF measurements” is used when the measures of electromagnetic fields concern the impacts of these waves on the human body.
In many occupations, there are lots of areas where employees are exposed to electromagnetic radiation or electromagnetic fields (EMF). These increased EMF levels have been triggered by achievements such as the growing LTE/5G wireless network, the increased amount of Wi-Fi radios in our living space, and the “industrial” Internet of Things (IIoT or IoT) or Machine to Machine communication (M2M).
This is particularly true for offices and workplaces that are located in today’s high tech cities, or near radar antennas, broadcasting and cellular phone transmitters. Industrial plants were operations like smelting or welding while using high-frequency energy, hospitals where a wide variety of medical equipment is in use that works on RF technology.

Effects of EMF exposure on the human body?

EMF exposure to the human body is not a recent phenomenon; humans have been exposed to natural sources of EMF since their existence, although EMR levels increased in the past century with the development of technology, industry, and radio communications. 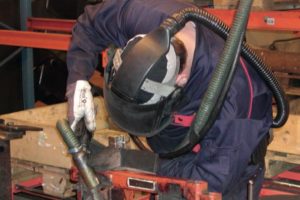 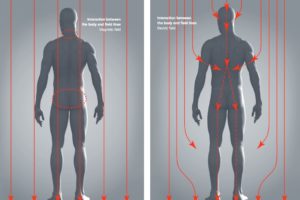 Skyline Networks offer a wide brach of Wi-Fi services so we are very familiar with Wi-Fi technology, and quite often, while we are on customer site, we get questions about Wi-Fi and health & safety. Some people are afraid of Wi-Fi an do not allow having access points installed into their office or near their workspace. Wi-Fi is commonly seen as the big villain when it comes to electromagnetic radiation, although Wi-Fi technology operates only in a small part of the broad spectrum where human-made EMR devices are active. Even in the same frequency where 802.11 operates, devices like motion detectors and other consumer devices are active.

If you look at the image below, it would not be entirely honest to blame only Wi-Fi for electromagnetic radiation at your workspace! 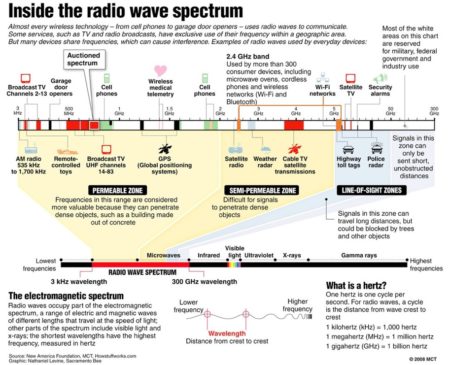 Yes, it does, especially by the Wi-Fi devices that you wear close to your body, your Wi-Fi devices will have a more significant impact on your body than the access point installed in your office/workspace (when strategically installed). The levels of EMF drop extensively when moving away for the Wi-Fi radio, in case that the Wi-Fi access point is further away from your Wi-Fi devices. Wireless devices will increase tx power, and communications stay longer on the air, which will increase EMF levels generating for your wireless devices.

Like with every potential hazard, some common-sense when operating or installing radios is recommended, in all our WLAN RF Design reports we take into account specific positioning of access points to mitigate EMF exposure from Wi-Fi radios as much as possible.

How do we measure EMF exposure?

We perform our EMF health and safety measurements based on specific measuring points (MP’s) on-site, if the MP is specified nearby a working spot, we perform two times 6 minutes measurements, one in a seated position and one in a standing position. The best scenario for real-world results is while the measurements take place during a typical working day under normal working conditions. 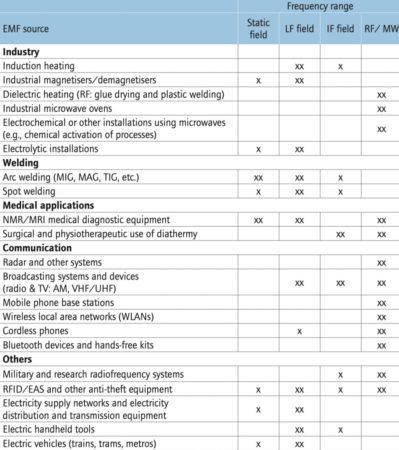 In case the exposure limit is exceeded at a specific measuring point, we will need to take measures mitigating the EMR to acceptable levels. First of all, we need to identify the source(s) of EMR and find out if they are originating outdoor or indoor. Once we identified the sources, we can take actions like disable or relocate the EMF source or even use RF-blocking materials (foil, paint, or wallpaper) to decrease or block the EMR. 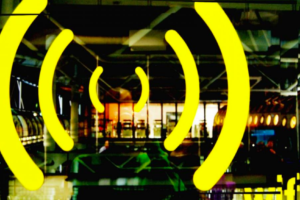 A broadband field meter of type Narda NBM-550 (measurement equipment) equipped with EF1891 (measurement probe with a dynamic range of 0.2-320 V/m and a frequency range of 3MHz to 18 GHz).

RF electromagnetic radiation has both electric and magnetic field components. It is often convenient to express the strength of the RF field in terms of each component. For example, the unit ‘volts per meter’ (V/m) is used to measure the electric field strength, and the unit ‘amperes per meter’ (A/m) is used to express the magnetic field strength. Another common way to characterize an RF field is by means of the power density. Power density is defined as power per unit area and is expressed in units of watts per square meter (W/m²) (or milliwatts per square centimeter, mW/cm², or microwatts per square centimeter, µW/cm²). 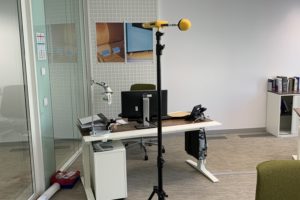 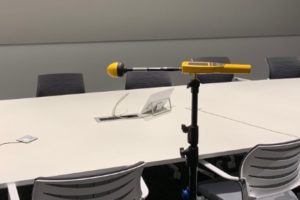 Limits and regulations for human safety to help avoid damage to human health as a result of exposure to electromagnetic fields, organizations such as the ICNIRP have authored several different international guidelines and standards. ICNIRP stands for the “International Commission on NonIonizing Radiation Protection.” The ICNIRP is a non-governmental organization comprising independent scientists from the whole world. It works closely with the World Health Organization (WHO).

Individual countries or country regions have different approaches to the limits stipulated in the various regulations, standards, norms, and recommendations. In general, thresholds for the general public are more stringent than those that apply to occupational exposure since it is assumed that workers operating in those typical environments are experienced and regularly informed.

Scientific research over many decades has enabled national and international health authorities to establish safety limits for exposure to electromagnetic fields. Exposure limits vary in frequency range country or even region legislations on the type of EMF which makes it very complex and challenging to find the “safe” spot regarding EMF exposure limits. 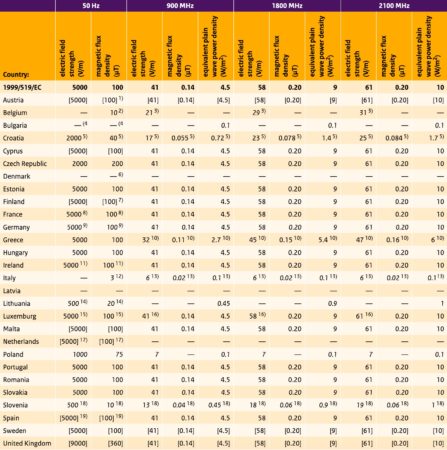 Do you need an EMF Health & Safety Audit?

Skyline Networks performs professional EMF Health & Safety measurements in your workspace environment; We validate all the measured results against the EU or specific country exposure limits and regulations.

For more info on the prerequisites and deliverables, click HERE

For more information or request an RFI questionnaire, please contact us.